Preventing the Continuous Decline of Bats 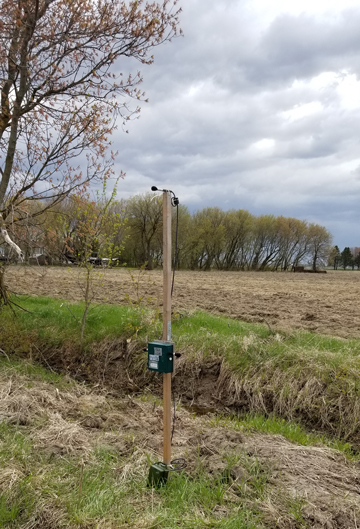 Bat and bird song meters. The microphone at the top of the stake is used to detect bats as they fly by.

Halloween is the culmination of Bat Week, which takes place annually from October 24-31. In its honour, this month’s Science Behind the Scenes looks into the work of ECCC Wildlife Research Division scientist Greg Mitchell, and former ECCC Co-op and graduate student Julia E. Put. Two of their papers on bat abundance in Eastern Ontario were recently published in the Landscape Ecology and Biological Conservation journals.

“Bats are an interesting conservation challenge not only because they cross international borders during their migration, but also because populations have recently plummeted because of white-nose syndrome. It is important to understand habitat requirements in order to give them a fighting chance to recover,” Mitchell said, when asked about his interest in bats.

In Canada, there are five bat species on the Species at Risk (SAR) list including Little Brown, Northern Long-Eared, Tri-colored, Spotted, and Pallid Bats. Nearly half of all Little Brown Bats, and about 40% of all Northern Long-Eared Bats, call Canada home. They have each seen their population drop by more than 90% since 2010. The Tri-Colored Bat has seen a 75% drop in its population over the same period. The other two bat species – the Spotted and Pallid bats – have very small and vulnerable populations found only in southern British Columbia at the northern edge of their respective population ranges.

Why have we been losing bats?

As previously mentioned, these major observed decreases in bat populations are largely due to white-nose syndrome (WNS), which is caused by a fungus that was first discovered in New York in 2006 and in Canada in 2010. WNS attacks bats’ skin while they hibernate. Unfortunately, each of the at-risk bat species in Canada hibernate in groups, which makes it easier for the fungus to spread. Bats with WNS wake up multiple times while in hibernation. This speeds up their metabolism and causes them to burn through their winter fat. With less food available, they become vulnerable to starvation.

Another important factor that might be resulting in population declines in bats is loss of breeding and foraging habitats. Mitchell and Put’s research showed how bat abundance and diversity may be declining partly due to the blending of the agricultural systems. Since agriculture today focuses on maximizing food production, there has been an increase in annual food crops (e.g., corn and soybean) compared to forage crops (e.g., hay and pastures). Mitchell and Put’s research specifically showed that bat diversity and abundance was higher in regions where there is a greater diversity of agriculture. They speculate that diverse field types provide a more stable food supply because a greater variety of insect species can be active at different times of the year.

Our scientists also showed that the use of chemical products such as pesticides and herbicides on annual crops resulted in less food (i.e., moths) available for bats. Consequently, there were fewer bats and fewer types of bats in agricultural landscapes that used pesticides compared to those that did not.

The importance of bats

Bats are essential to agricultural ecosystems, since they help control the population of pests that damage crops such as corn and soybeans. For example, bats provide an estimated $3.7 billion in natural pest control services, which means farmers can use less commercial pest control products.

Mitchell is currently involved in other bat projects looking at habitat requirements and bat migration.

“It is important to collect baseline data on migratory patterns. Better bat monitoring across the country means a better understanding of the annual cycle of bats , which is needed to practice year-round conservation,” added Mitchell on the study of bats.

ECCC is also collaborating with Agriculture and Agri-Food Canada on a two-part project. The first part is an experiment examining how removing woody structures along agriculture drainages affects bat activity and diversity. The second is examining how long it takes bat diversity to recover as woody vegetation begins to grow back along the drainages.

The future of bats

While the bat population today is still very low, the good news is it is now stable. “There is a large community of researchers actively experimenting with different solutions, which are showing some promise, to try and eradicate the WNS fungus. When bats do begin to recover, we will be well positioned to help with their recovery through our understanding of their habitat needs,” adds Mitchell.