Contaminants in Canada’s North: State of Knowledge and Regional Highlights (2017) 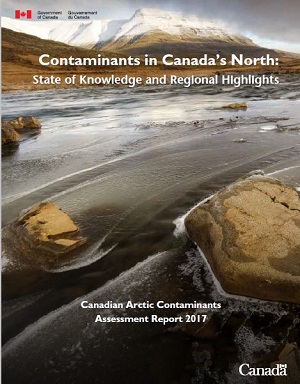 In Canada’s North, contaminants (such as mercury and persistent organic pollutants or POPs) come primarily from sources outside Canada via the atmosphere, ocean currents, and rivers. Animals and people are exposed to mercury and POPs through the food that they eat.

Contaminants enter the food chain through plants and algae, and are then passed up the food chain from prey to predator. Contaminant levels can increase over time as they “bioaccumulate” in an animal’s body. A process called `biomagnification´ leads to an increase in concentration with each step up the food chain. At levels of exposure that exceed applicable guidelines, contaminants can affect the health of wildlife and people. Many people in Canada’s North, particularly in Indigenous communities, rely on traditional/country foods harvested from the land, rivers, lakes and sea, for many nutritional and cultural benefits. These benefits must be considered when developing strategies to reduce contaminant associated risks to human health to achieve a balance between the many known benefits of country foods, and the potential risks.

NCP Assessments and this report

The Northern Contaminants Program (NCP) was established in 1991 in response to concerns about human exposure to elevated levels of contaminants in wildlife species that are important to the traditional diets of Indigenous peoples. NCP assessments are carried out in order to synthesize current knowledge on contaminants in the Arctic environment and people.

Assessment results are used to assess the safety of traditional/country foods, and to inform policy, in Canada and abroad, resulting in actions to eliminate contaminants from long-range sources.

NCP assessments are published as Canadian Arctic Contaminant Assessment Reports (CACAR), which are technical documents intended for a scientific audience. The current Highlights report is a plain language summary of results reported in a series of assessments published since 2012, including: Mercury in Canada’s North (2012), Persistent Organic Pollutants in Canada’s North (2013), and Human Health (2016). This assessment period was also significant for global regulatory actions that included the addition of new chemicals to the United Nations Environment Programme (UNEP) Stockholm Convention on POPs (2004), and the signing of the UNEP Minamata Convention on Mercury (2013).

Overall, much progress has been made in Canada and abroad to reduce sources of contaminants. Despite reduced emissions, however, contaminants continue to be a concern, impacting the health and well-being of wildlife and people in Canada’s North. This report identifies ten key findings that arose from the CACAR III assessment reports.

Key findings 1-3 focus on the levels of specific contaminants:

(1) Concentrations of POPs are generally going down across the Arctic.

However, large quantities are still stored in `environmental reservoirs´ that will take many years to deplete.

(2) As `new POPs´ come under regulation, their levels in the Arctic decline.

Since 2004, eleven new POPs have been added to the Stockholm Convention, which is associated with decreasing levels in the environment.

(3) Mercury levels in the Arctic are stabilizing but are still several times higher than during pre-industrial times.

Levels peaked in the mid-2000s and have since leveled off or even declined slightly in some areas.

Key findings 4 and 5 focus on the environmental processes that influence contaminants:

(4) Climate change can affect how POPs and mercury cycle in the Arctic environment and accumulate in wildlife.

(5) The complex movement of contaminants in the Arctic environment and wildlife is now better understood.

Research on environmental processes has revealed new information about mercury and POPs, including details about mercury methylation, and how processes for newer POPs differ from those of the original POPs.

Key findings 6 to 9 focus on health risks for wildlife and Northerners:

(6) Current levels of POPs and mercury may be a risk for the health of some Arctic wildlife species.

While there is no evidence of widespread biological effects in Canadian arctic wildlife, some species of fish, marine mammal and seabirds exceed threshold levels for POPs and mercury that are related to adverse effects.

(7) While exposure to most POPs and mercury is generally decreasing among Northerners, mercury remains a concern in some regions.

Decreasing concentrations are likely related to a combination of reduced levels in the environment and shifts in consumption of traditional/country foods. Mercury exposure among some Inuit women of childbearing age remains a serious concern, and highlights the need for international action on mercury.

(8) Traditional/country foods continue to be important for maintaining a healthy diet for Northerners. The consumption of such foods is still fairly widespread and associated with improved nutritional status, but a continuing shift toward market food is drawing concern for potential implications on nutritional health and disease.

(9) Environmental exposure to contaminants in the Arctic has been linked to health effects in people.

For example, mercury and PCBs have been linked to attention deficit disorder in children at levels of exposure observed in the Canadian Arctic.

This report provides information on contaminants in five regions of Canada’s Arctic, including: Yukon, Northwest Territories, Nunavut, Nunavik, and Nunatsiavut. Indigenous peoples, including Inuit, First Nations and Métis, make up the largest proportion of the population in Canada’s North.

The main traditional/country foods consumed in indigenous communities vary across the North, and within regions, and include a variety of freshwater and marine fishes, caribou, ducks and geese, ringed seal and beluga. A wide variety of other species are also consumed, though generally to a lesser extent.

In 2007–2008, the Inuit Health Survey (IHS) assessed people’s health status in many Inuit community across the Canadian Arctic. As part of this study, researchers documented the traditional/country foods that people were eating, and assessed nutrient and contaminants levels in participants and their foods. IHS results reinforced the message that the benefits of eating such foods generally outweigh the risk of contaminant exposure.

One exception is mercury, which posed varying levels of concern in all regions. For example, health advisories were issued for ringed seal liver consumption by women of child bearing age in Nunavut. Advisories were also placed on some lakes and fish in the Northwest Territories, where NCP datasets detected increasing mercury levels in fish. The long term data sets from the NCP have played an important role in bringing about the global Minamata Convention on Mercury.

As a result of global regulation, POPs generally declined across all regions. For example, in the Northwest Territories, monitoring results show that POPs in beluga and ringed seal have declined since the mid-1990s. However, negative health effects from some POPs are still a concern for some species of seabirds and marine mammals.

In light of the findings of the CACAR III assessments, the NCP and its partners, including indigenous organizations, identified a number of priorities for future work through four themes. These include activities in:

(1) environmental monitoring and research, such as detecting new chemicals and researching the interacting effects of contaminants and climate change;

(2) community-based monitoring and research through a new subprogram that builds science capacity in the North and optimize the use of traditional knowledge;

(3) human health, such as expanding the monitoring of contaminant exposure among people from different regions; and

The NCP further calls on broader actions to achieve its mandate and support Arctic science. For Canadian research and monitoring programs (including NCP), this includes ensuring adequate resources, properly managing and communicating information, and multidisciplinary assessments of issues, such as climate change. It further calls for better engaging northern entities, in monitoring and research and international activities.

Finally, for Arctic nations, including Canada, NCP calls for the prompt communication of national POPs information to international bodies, swift ratification of the Minamata Convention on Mercury, and recognition of food and water security as a priority for action. It further calls for monitoring the impacts of socio-economic and environmental change on local sources of contaminants, and considering the impacts of contaminants on ecosystems and people in developing adaptation strategies for a changing Arctic.