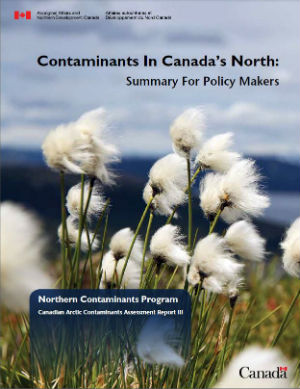 Concentrations of `legacy POPs´ are generally going down across the Arctic.

As `new POPs´ come under regulation, their levels in the Arctic decline.

Mercury levels in the Arctic are stabilizing but are still several times higher than during pre-industrial times.

Climate change can affect how POPs and mercury cycle in the Arctic environment and accumulate in wildlife.

The complex movement of contaminants in the Arctic environment and wildlife is now better understood.

Current levels of POPs and mercury may be a risk for the health of some Arctic wildlife species.

While exposure to most POPs and mercury is generally decreasing among Northerners, mercury remains a concern in some regions.

Traditional/country foods continue to be important for maintaining a healthy diet for Northerners.

Environmental exposure to contaminants in the Arctic has been linked to health effects in people.

Continued international action is vital to reducing contaminant levels in the Arctic.

Contaminants from long-range, global sources continue to be of concern in Canada’s North. These contaminants accumulate in animals that serve as foods traditionally consumed by Northerners and impact on the health and well-being of both wildlife and people. While much progress has been made in Canada and internationally to address the issue of some POPs and mercury, the problem has not been solved, particularly as many new POPs appear in the Arctic environment, and as climate and other changes (e.g. increased economic development in In light of the findings of the CACAR III assessments, the NCP also calls for broader action on measures related to achieving its mandate and supporting Arctic science in general:

Canadian research and monitoring programs, including the NCP, must work together to:

Arctic Nations, including Canada must: