Synopsis of research conducted under the 2016-2017 Northern Contaminants Program 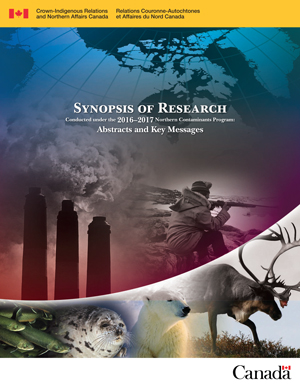 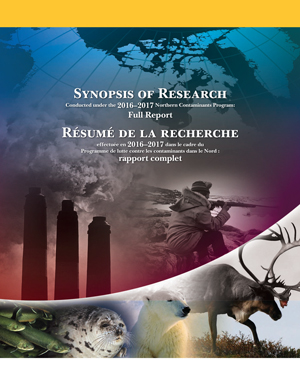 The Northern Contaminants Program (NCP) works to reduce and, wherever possible, eliminate contaminants in traditionally harvested foods, while providing information that assists informed decision making by individuals and communities in their food use. The Synopsis of Research Conducted under the 2016-2017 Northern Contaminants Program: Abstracts and Key Messages provides a summary of the activities and preliminary results of each project funded under the NCP between April 1, 2016 and March 31, 2017.

The projects described in this report cover the broad range of topics that contribute to understanding and addressing northern contaminants issues. They are arranged according to the five NCP subprograms: Human Health; Environmental Monitoring and Research; Communications, Capacity and Outreach; Community Based Monitoring and Research; and Program Coordination and Indigenous Partnerships. Specific research priorities, as outlined in the program’s strategic documents (i.e. the NCP Blueprints and NCP Call for Proposals 2016-2017), included dietary contaminant exposure, food choice, and risk perception; effects of contaminants on the health of people and ecosystems; contaminant levels and trends in the Arctic environment/wildlife and the influence of climate change; and the benefits/risk evaluation of country food consumption. Projects were carried out using a variety of methodologies including fieldwork, laboratory analysis, community based monitoring, Indigenous Knowledge workshops, and much more.

All projects supported by the NCP are subject to a comprehensive technical, peer and northern social/cultural review process, involving external peer reviewers, technical review teams, regional contaminants committees and the NCP Management Committee. This review process ensures that each project supports the priorities and objectives of the NCP and its partners. Engagement and partnership with Indigenous organizations, northern territorial and/or community authorities is required for all projects involving activities within northern communities, fieldwork in the North and/or analyses of samples, as a condition of approval for funding.

This report contributes to ensuring the transparency of the NCP and the timely sharing of results. More detailed project reports, describing project objectives, activities, results, and conclusions are compiled in the Synopsis of Research Conducted under the 2016-2017 Northern Contaminants Program: Full Report, which is available through the NCP Publications Database at www.aina.ucalgary.ca/ncp/. All individual project reports have been lightly edited for clarity and consistency.

In addition to the Synopsis of Research publications, publications related to NCP funded projects (including peer reviewed journal articles) can be searched and accessed through the NCP Publications Database at www.aina.ucalgary.ca/ncp/. Also, data and metadata associated with individual projects can be found on the Polar Data Catalogue website at www.polardata.ca.

Further information about the Northern Contaminants Program is available on the NCP website at www.science.gc.ca/ncp.

The Northern Contaminants Program (NCP) engages Northerners and scientists in researching and monitoring of long-range contaminants in the Canadian Arctic, that is, contaminants that are transported to the Arctic through atmospheric and oceanic processes from other parts of the world and which remain in the Arctic environment and build up in the food chain. The data generated by the NCP is used to assess ecosystem and human health, and the findings of these assessments are used to address the safety and security of traditional country foods that are important to the health and traditional lifestyles of Northerners and northern communities. The findings also inform policy, resulting in action to eliminate contaminants from long-range sources. The NCP contributes scientific data and expertise to contaminants-related international initiatives such as the Arctic Council’s Arctic Monitoring and Assessment Programme (AMAP), and to international agreements such as the United Nations Environment Programme’s Minamata Convention on Mercury and Stockholm Convention on Persistent Organic Pollutants, that work on a global scale to improve the health of Arctic people and wildlife over the long term.

The NCP is directed by a management committee that is chaired by Crown-Indigenous Relations and Northern Affairs Canada (CIRNAC), and consists of representatives from four federal departments (Environment and Climate Change Canada, Fisheries and Oceans, Health and CIRNAC), five territorial, provincial and regional governments (Yukon, Northwest Territories, Nunavut, Nunavik and Nunatsiavut), four northern Indigenous organizations (Council of Yukon First Nations, Dene Nation, Inuit Tapiriit Kanatami and Inuit Circumpolar Council), five regional contaminants committees, and Canada’s only Arctic-focused Network of Centres of Excellence (ArcticNet). The NCP Management Committee is responsible for establishing NCP policy and science priorities and for making final decisions on the allocation of funds. The Regional Contaminants Committees in Yukon, Northwest Territories, Nunavut, Nunavik and Nunatsiavut support this national committee with region-specific expertise and advice. Funding for the NCP’s $4.1 million annual budget comes from CIRNAC and Health Canada. Details about the management structures and review processes used to effectively implement the NCP, and the protocol used to publicly disseminate health and harvest information generated by the NCP can be found in the NCP Operational Management Guide (available upon request from the NCP Secretariat).

In 2016-2017, the NCP celebrated its 25th anniversary of funding contaminants research and communications activities in northern Canada. The NCP was established in 1991 in response to concerns about human exposure to elevated levels of contaminants in fish and wildlife species that are important to the traditional diets of northern Indigenous peoples. Early studies indicated that there was a wide spectrum of substances - persistent organic pollutants, heavy metals, and radionuclides - many of which had no Arctic or Canadian sources, but which were, nevertheless, reaching unexpectedly high levels in the Arctic ecosystem.

The Program’s key objective is to reduce and, where possible, eliminate contaminants in northern traditional/country foods while providing information that assists informed decision making by individuals and communities in their food use.

Under the first phase of the NCP, research was focused on gathering the data required to determine the levels, geographic extent, and source of contaminants in the northern atmosphere, environment and its people, and the probable duration of the problem. The data enabled us to understand the spatial patterns and temporal trends of contaminants in the North, and confirmed our suspicions that the major sources of contaminants were other countries. The data, which included information on the benefits from continued consumption of traditional/ country foods, was also used to carry out assessments of human health risks resulting from contaminants in those foods. Results were synthesized in the first Canadian Arctic Contaminants Assessment Report (1997).

Extensive consultations were conducted in 1997-1998 to find the common elements between the concerns and priorities of northern communities and the scientific needs identified as critical for addressing the issue of contamination in Canada’s North. As a result, research priorities were developed based on an understanding of the species that are most relevant for human exposure to contaminants in the North, and geographic locations and populations that are most at risk.

In 1998, initiatives got under way to redesign the NCP, and implement new program features which continue to this day: 1) the NCP blueprints that represent the long-term vision and strategic direction for the NCP; and 2) an open and transparent proposal review process. These features ensure that the NCP remains scientifically defensible and socio-culturally aware, while at the same time, achieving real progress in terms of the Program’s broad policy objectives.

In 1998-1999, the NCP began its second phase, which continued until 2002-2003. Results of this phase were synthesized in the Canadian Arctic Contaminants Assessment Report II (CACAR II 2003). During that time, the NCP supported research designed to answer questions about the impacts and risks to human health that may result from current levels of contamination in key Arctic food species. To ensure a balanced assessment of the risks of consuming traditional food, an emphasis was placed on characterizing and quantifying the benefits associated with traditional diets. Communications activities were also emphasized and supported. Under the leadership of the northern Indigenous organizations, the dialogue between northerners and the scientific community, which had been initiated during the early days of the NCP, continued to build awareness and an understanding of contaminants issues, and helped to support communities in dealing with specific contaminant issues at the local level.

Since 2003, the NCP has continued to contribute to assessments that synthesize data funded through the NCP program. In 2009, the NCP released the Canadian Arctic Contaminants and Health Report. This report compiled research funded under the Human Health subprogram since the CACAR II release in 2003. It covered topics including health status of the Canadian Arctic population, human exposure to contaminants, toxicology, epidemiology, and risk-benefit evaluation.

The next reports in the CACAR series, Contaminants in Canada’s North: State of Knowledge and Regional Highlights, and Human Health 2017 will be released in 2018.

The NCP effort to achieve international controls of contaminants has remained strong throughout the program’s history. The NCP continues to generate data that allows Canada to play a leading role, particularly through cooperative actions under the Arctic Council’s Arctic Monitoring and Assessment Programme (AMAP), in the following initiatives:

(from Contaminants in Canada’s North: Summary for Policy Makers, 2015)

(adapted from Contaminants in Canada’s North: Summary for Policy Makers, 2015)

In terms of Environmental Monitoring and Research, the NCP

In terms of Human Health Research, Monitoring and Risk Assessment, the NCP