What’s in my firewood, and why should it matter?

Ah, a nice warm fire! Gathering around campfires in the summer or a hearth in the cold winter is classically Canadian. Firewood is plentiful and who doesn’t like its cheery warm glow? 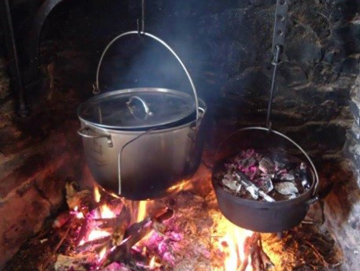 Cooking in the hearth

What we don’t often think about is the wood itself. Where did it come from? We see signs saying “Don’t move firewood” along the highways and at provincial park entrances. The park ranger might even ask us if we brought wood from home. What’s that all about? It’s just firewood, right?

As a scientist with a specialty in insects, it’s my job at the Canadian Food Inspection Agency to do what’s called "pest risk assessment".

I read a lot of articles and websites, talk to experts, and find information to determine the potential risk of non-native insects to Canada’s environment and economy. By risk, I mean the chance that something bad happens and how bad might it be. Sometimes, I’m asked to determine what insects could come in with fruit from Asia or with seedlings from South America. Other times I’m asked to support Canadian exports by listing insects that might accompany those exports and describing how our producers limit the chance that happens. If a shipment of wood is found with insects, I help decide what we should do: destroy it, seal it up and ship it back, or accept it. 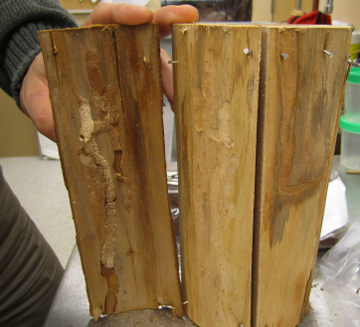 Imported wood intended for decorative purposes, found with insects in it

How does this relate to my camping trip?

Well, firewood is often cut for reasons other than making fires. Sometimes trees are cleared to make room for housing. Cities and homeowners often cull damaged and diseased trees for aesthetic and legal reasons, and many of them end up as firewood. So where does firewood go? A lot of it is burned in cities and towns near where it was cut. More still moves from rural areas into urban centres for use in fireplaces and woodstoves. Not much firewood moves from cities to rural areas, except when people take it with them to a cottage, campground or a new house. An interesting studyFootnote i from the U.S. shows just how far campers will travel with firewood. While most don’t go very far, some will go from New York City all the way to Utah and California! Half of all campers travel with firewood. The research is from the U.S., but it should be safe to assume it’s not that much different in Canada.

Why is that a problem?

Canadian cities see millions of imports and shipping containers arrive daily. They arrive on wooden pallets and wooden crates to storage yards and towns all across Canada. Even with international treaties in place to prevent it, live insects and fungi still arrive on these pallets, crates and other wooden material associated with international shipping. Estimates are that about 0.1% to 0.5% of all solid wood packaging material carries unwanted pestsFootnote iiFootnote iii. Doesn’t sound like a lot, but let’s first multiply by all those of pallets and crates that come in each year…

Why can’t we inspect everything and prevent this?

New ships can hold over fifteen thousand shipping containers. No regulatory agency in the world has the capacity to inspect that much cargo all at once. Trade volume and speed is simply overwhelming. We rely on treaties, spot inspections and surveys in areas where pests might be introduced to find them before they get out of control.

Most of the time, these invasive pests don’t make it into the environment or, if they do, don’t survive long enough to be harmful. On average, only one in a thousand escapes, survives and is harmfulFootnote iv. Again, doesn’t sound like a lot, but let’s pull out the calculators and multiply again by the 5 million or so shipping containers Canada receives each year.

What happens if a pest gets in and survives?

Foreign pests may establish and do nothing, but they might also hasten the death of weak trees (like the European brown spruce longhorned beetle that arrived in Halifax does) or be real tree killers (like the emerald ash borer or the Asian longhorned beetle, both of which arrived in Ontario from eastern Asia). In all cases, they started their infestations in urban centres. Makes sense – that’s where most of our trade items end up.

Infestations start small and can take a long time to be noticed. The latest Asian longhorned beetle infestation percolated along in scrubby maple trees in an industrial zone for years before it was found. Once they were recognized, CFIA and other regulatory agencies and cities stepped in to set up quarantine zones, prevent movement of wood, and cut down the trees. It’s during this lag time between arrival and a noticeable infestation where things can really go sideways. If the infestation stays in the scrubby maples at the back of the shipping lot, then we can destroy and eradicate the pests. But if it is spreads, it’s much harder or even impossible, no matter how much we might be able to spend in trying. In that case, all we can do is bring in regulations to limit the harm.

That’s where the firewood comes in!

As the trees in the infestation zone show signs of attack and disease, homeowners, contractors, or city workers could cut them down during routine tree-trimming and removal activities. Nowadays, city foresters are trained to spot unusual causes for tree disease and death, but homeowners cannot be expected to recognise the signs. The tree limbs and boles are usually made into firewood, perhaps to be used or disposed of by the homeowner, or sold by the contractor. But the insects that caused the harm can survive up to two to three years in a piece of firewood – drying is not always sufficient to make the firewood piece inhospitable to the insects. 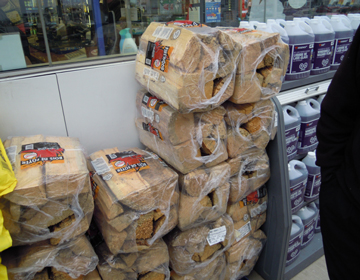 Firewood for sale in Ontario, infested with mountain pine beetle

A 2010 studyFootnote v looked at about 1,000 pieces of firewood collected from vehicles driving from Michigan’s lower to its upper peninsula (e.g. from Detroit to Sault Ste. Marie). About 230 pieces of firewood contained live wood-boring insects. Another 410 had signs that wood-boring insects at one time had been in them. Most of these insects would be native and of low risk, but some, especially if the firewood were cut from a sick urban tree, could be carrying a non-native insect. Don’t get me wrong: native insects aren’t off the hook either. Canada is a big, big country. What’s native in one part could be invasive in another. For example, CFIA found bundles of firewood for sale in Ontario that were infested with the mountain pine beetles, a native to Canada, but invasive species that is causing a lot of harm in western Canada. 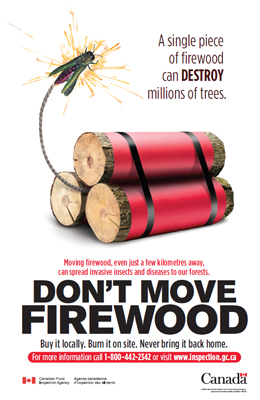 Commercial producers have to comply with official regulations and audits by inspectors. Although homeowners and small-scale producers have to follow the same rules, auditing and controlling them all is simply not possible. We rely on good judgment of an educated public to help limit or stop the spread of invasive species. That’s not to say CFIA hasn’t fined people caught moving firewood out of a quarantine area, but it’s also the time before a quarantine area has been declared that is important. It’s best to buy firewood from a local producer and burn it locally. Ask your firewood producer where the wood you purchased was cut to prevent new invasive forest pests from making it out of cities and into the country. This gives cities and regulators a chance to spot and control pests. In short, keep your firewood local. Use it where you get it, and buy it where you’re going to burn it.

Return to footnote i referrer