Surviving the heat: The impacts of the 2021 western heat dome in Canada

Residents of British Columbia won’t soon forget the summer of 2021. What we now call the western heat dome was the deadliest weather event in Canada to date. In fact, the BC Coroners Service confirmed that there were 619 heat-related deaths during the heat dome, which took place from June 25 to July 1.

During this time, western Canada experienced temperatures up to 20°C above normal, with provinces recording more than 103 all-time heat records, including Canada’s highest temperature ever measured in Lytton, BC (49.6°C on June 29, 2021). The entire town of Lytton subsequently burned in a wildfire the next day.

“That situation was quite a disaster and we empathize with those who lost their homes. Yet there is so much we can learn from this specific event,” says Melissa Gorman, Science Advisor at Health Canada. “We are looking at why people died and what we can do in the future to avoid this.”

Extreme heat is the leading cause of illness and death from weather-related hazards in Canada. With climate change, it is predicted that the frequency, severity and duration of extreme heat events will continue to increase in Canada. Gorman is part of a team who is paying close attention to extreme heat events, and finding ways to protect those most susceptible to their effects.

Dr. Sarah Henderson, Scientific Director of Environmental Health Services at the British Columbia Centre for Disease Control (BCCDC), confirms that there was a 100% increase in deaths among adults aged 50 or older during the heat dome. Many of the people who died had chronic health conditions, especially schizophrenia, depression, substance use disorders, diabetes, heart disease, and respiratory disease.

Dr. Henderson’s analyses also found that the vast majority of deaths happened inside people’s homes, though there were also some deaths in hospitals and long-term care facilities. “People don’t die because it is hot outside; they die because it is hot inside.” Furthermore, she found that deaths at home were concentrated in deprived neighborhoods without much surrounding green space.

The heat inside a home without air conditioning can accumulate each day as it gets hotter and hotter outdoors.

Following the western heat dome, researchers are hard at work to prepare for the next occurrence. Emily Tetzlaff, a PhD student in the Human and Environmental Physiology Research Unit at the University of Ottawa and Research Affiliate Student at Health Canada, is looking at media coverage of the event to better understand the various impacts of the heat dome on human health, the environment and the economy in Canada.

Tetzlaff is trying to understand whether public health messages reached the right people in the right places and at the right time. She is also examining how the media portrays extreme heat both in writing and with images.

“There can be conflicting information. The heat dome was a dangerous event, but some media outlets tend to portray the situation positively through imagery, for example a young person sitting on a beach and sipping a drink. It doesn’t give the impression that there is a real threat from the heat,” explains Tetzlaff. 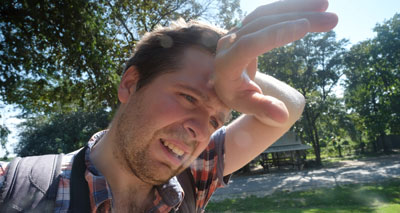 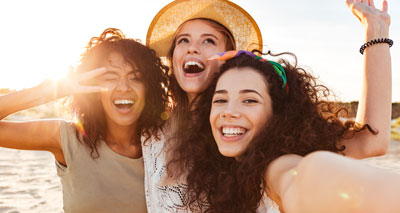 Media portrayed various images of extreme heat, both positive and negative. Emily Tetzlaff is examining the impact of imagery on public health messaging transmitted through the media.

Researchers also want to know how the weather alerts issued by Environment and Climate Change Canada trickled down through the media, and who was being promoted as an expert. This will help them understand how individuals get the information they need to stay safe, and who they trust the most.

“Some of our findings are really practical. We will better understand who people go to for information on the health impacts of heat, and will be better able to communicate the science to the public. We may be surprised at what we discover! Ultimately, we hope this series of studies can help us prepare and build resilience to extreme heat.” says Tetzlaff.

Results from this analysis are expected later this year, and will inform future policy and program work in this area.

Protection from the heat

Researchers suggest that green spaces can protect against the effects of extreme heat. “We know that mature trees can help protect from excessive heat. In fact, an increase of 5% in the tree canopy within a 100 meter radius decreased the risk of death during the heat dome by about 10%,” explains Dr. Henderson.

As the climate warms, we can expect extreme heat events to continue happening across Canada. The BCCDC is piloting a new system this summer that differentiates a heat warning from an extreme heat emergency. They are looking at the best ways to ensure the public understands the difference between these two types of events, and acts accordingly.

They are also putting in place mechanisms to reach people most at risk, who might be less likely to heed public health advice. They are working with a wide range of community partners to help better protect those most vulnerable directly in their homes. The new BC Heat Alert and Response Systems (BC HARS) also supports the potential use of broadcast instrusive alerting in the case of an extreme heat emergency.

“We can learn from the BC heat event to update our tools and messaging that we share with other provinces and territories so they can be better prepared for future heat events and ultimately better protect people living in Canada,” says Gorman.

How to protect yourself from the health effects of extreme heat