When there is increased demand for COVID-19 testing capacity, driven, for example, by the increase in Omicron cases, a cross-country network of surge capacity testing sites springs into action. Most recently, these sites were used as part of the response to the Omicron wave, which led to a sudden surge in testing needs in Canada. Under the leadership of the Public Health Agency of Canada’s National Microbiology Laboratory (NML), these sites provide extra testing capacity and help provinces, territories and other government departments clear testing backlogs. This reduces turnaround times for test results, meaning public health interventions can happen more quickly.

All hands on deck

In anticipation of future waves of COVID-19, the NML began the process to establish federal surge capacity in 2020. To launch these testing sites, the NML provided the necessary training and leadership to six other Government of Canada laboratories so they could shift from their normal research activities to diagnosing COVID-19.

When it came to selecting the sites, the NML sought out other laboratories that had similar skillsets to those required to diagnose COVID-19 that were also in strategic locations, close to population centres. The six federal labs that met the criteria were:

“We tapped into the expertise that Government of Canada scientists have in different areas, such as animal pathogens, to establish high quality testing and put it to good use to protect the health of Canadians,” says Dr. Cindi Corbett, Director, Health Security and Response Division. 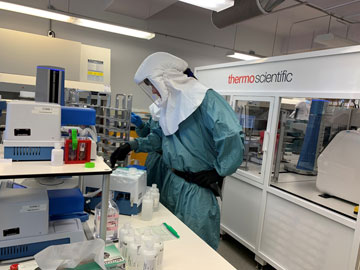 A scientist processing samples at the NML lab in Guelph, ON.

There were many things to think about—training, quality assurance, biosecurity, supplies and logistics. It was an all hands on deck approach at the NML, where staff created training programs with dedicated trainers and liaisons for each site. The NML trained over 200 people, including a team of 20 of its own staff who take turns verifying and approving the test results coming in from surge sites.

“At the time, some labs were at limited capacity due to COVID-19 lockdown restrictions, and some of the scientists were working from home on alternative non-lab based projects. Many scientists stood up and wanted to help. They had pride in using their skillsets to help fight the COVID-19 pandemic,” says Dr. Corbett. 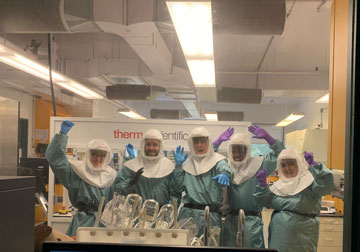 Staff at the NML lab in Guelph after a long day of testing COVID-19 samples.

Dr. Celine Nadon, Director, Division of Enteric Diseases, and Kim Ziebell, Senior Research Scientist, whose teams specialize in enteric bacterial diseases (diseases transmitted through food and water such as Salmonella and E. coli) provided the vast majority of testing for Ontario land border entries in 2021 from the U.S., at the NML lab in Guelph. While they used some of the same equipment and technologies as they would to diagnose a Salmonella infection, they had never worked with viruses in their lab and had to apply their expertise to a new type of testing and a volume they had never seen —107,000 tests over four months in 2021. They worked under the guidance of their NML colleagues in Winnipeg, who regularly diagnose respiratory viral infections. They also have a wealth of expertise in the development of high-consequence laboratory testing networks that helped in establishing the workflow and required robotics systems.

“We rapidly pivoted from our regular work even though we had never done work like this ever before,” says Dr. Nadon. “The expertise of the team shone through as they were able to take their knowledge from a totally different disease area and adapt it to COVID-19. It was challenging but also a success in the strength of our staff at NML.”

While the NML does not specialize in high-throughput testing, they were able to adapt and find solutions to keep up with the huge volume of tests. Kym Antonation, Chief of the Bioforensics Assay Development and Diagnostics Section at the NML, designed a custom robotic system that is now in place at four of the surge labs. The system uses a robotic arm to do the testing, speeding up output threefold. It is reprogrammable and can be modified to support other types of testing in the future. 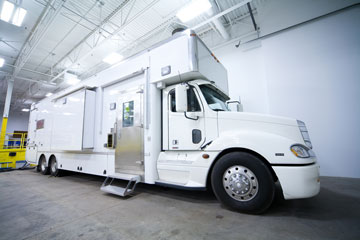 The NML has supported testing efforts from the earliest days of COVID-19 and even brought their mobile labs to where they were needed. Staff spent two months testing repatriated Canadian citizens using mobile truck laboratories to provide fast on-site testing in early 2020. These mobile labs were formerly used at the Vancouver Olympics and other high-profile events. Some of them are built for high containment pathogens and typically are used to test for biological threats. Earlier in the pandemic, the surge sites were also activated to help process samples collected from travellers arriving into Canada at land ports of entry.

A “One Health” approach for future pandemics

The NML plans to continue the partnerships it established with the Government of Canada lab network. While the sites across the country will eventually go back to their own work, they hope to continue cross-training and put agreements in place to call on one another other in the future during times of need. This is part of taking a multidisciplinary “One Health” approach to emergency response and preparedness for future pandemics. Strengthening the infrastructure and relationships amongst the Government of Canada’s scientists takes into account how human, animal and ecosystem health are related.

“One of the best things about putting this network in place is that we can transfer those skills to people across Canada to be used in a variety of ways. Going forward, the infrastructure and collaborations are there when we need them,” says Ms. Antonation.