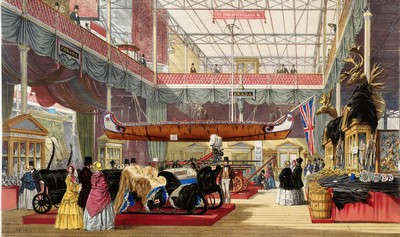 The first themed international exposition was held in London in 1851. The Exhibition of the Industry of All Nations was spearheaded by Queen Victoria’s husband Prince Albert and was held in the spectacular Crystal Palace in Hyde Park. During its six-month run, six million people viewed exhibits put on by 25 countries.

Canada’s contribution focused on stimulating trade by showcasing the wealth of its natural resources and their potential for development. William Logan played a leadership role in pulling together the Canadian exhibit, and he set about collecting the most impressive samples of economic minerals that he could find. This was the first major collection of Canadian mineral samples that the world had ever seen, and it was a very popular exhibit.

The Exhibition Committee commended the Canadian pavilion, noting “it is superior, so far as the mineral kingdom is concerned, to all countries that have forwarded their products to the exhibition.” Logan arranged a similar exhibit for the 1855 Exposition Universelle in Paris. Many honours came his way as a result of his efforts, foremost of which was a knighthood conferred by Queen Victoria at Windsor Castle in 1856.