The History of the Geological Survey of Canada in 175 Objects

The Geological Survey of Canada can lay claim to a unique role in the exploration and development of Canada.

In 1842, 25 years before Confederation, its founder and first director William E. Logan began by assessing the mineral wealth of the Province of Canada and discovered an impressive range of mineral deposits. As Canada grew, the Survey reported on all aspects of its natural resources.

Travelling by horse, foot, or canoe – often through uncharted wilderness – its early scientists mapped, described, and recorded Canada’s geology. Indeed, they were the government’s “official” explorers. Their reports were influential. For example, they played a key role in recommending the route for the railways that linked Canada together as it expanded westward.

The Survey scientists collected rocks, minerals, fossils, flora, fauna, as well as photographs and artifacts of indigenous peoples that they encountered in their wide-ranging travels. These formed the nucleus of a public museum started by Logan in Montreal in the1840s and which was moved to Ottawa in 1881. In 1911, the Victoria Memorial Museum was built in Ottawa to house the Survey and its collections. The specimens and artifacts collected by Survey scientists are still part of the treasures held by our national museums.

The early work of the Survey laid the foundation for the development of Canada’s mineral and energy resources. In the 20th and 21st centuries, its national geological and resource maps, publications, and scientific studies have provided a significant stimulus for our expansion and growth.

Throughout its history, the Survey has maintained the highest standards of research. Its scientists have advanced international geoscience in fields such as seafloor spreading, tectonic plate movements, and paleomagnetism. They are also world leaders in the development of airborne geophysics. Recent contributions include new understanding of subduction zone earthquakes, groundwater and mineral deposits, climate change science, space weather forecasting, and seafloor mapping to delineate offshore boundaries.

The 175 objects were selected from suggestions made by Survey staff and alumni. They provide a glimpse into the Survey’s 175-year-long history and its outstanding contribution to the development of Canada. 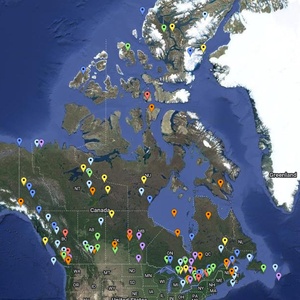 Examples of the 175 objects: