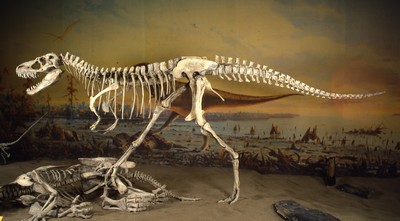 Few dinosaurs are as awe-inspiring as Tyrannosaurus rex, but one that comes close is Albertosaurus (meaning Alberta lizard). In 1884, Geological Survey of Canada geologist Joseph Tyrrell discovered an Albertosaurus skull in the badlands along the Red Deer River. This was the first time the world had seen Albertosaurus. It was a chance find as Tyrrell was exploring the river valley cliffs for coal. His milestone discovery marked the beginning of a grand age of dinosaur exploration and research in this now famous area.

Albertosaurus lived about 70 million years ago in western North America and, although smaller than its close relative Tyrranosaurus rex, was a fearsome carnivorous hunter. As a two-legged walker and runner (at speeds approaching 30 km/hour), the three-metre tall Albertosaurus was able to see and quickly chase down potential prey. Albertosaurus skeletons are commonly found in groups, both juveniles and adults, suggesting that these animals socialized and hunted in packs.

The richness and quality of the dinosaur-bearing bone beds of Alberta’s badlands are now internationally renowned, drawing many visitors to the Royal Tyrrell Museum of Paleontology, which opened in 1985 and is a fitting tribute to the discoverer of Albertosaurus.