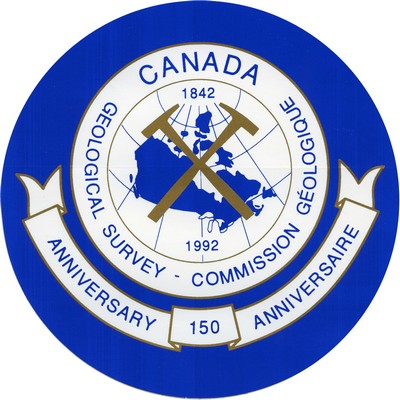 The Geological Survey of Canada threw a major party to mark its 150th anniversary in 1992. Events ran throughout the year and across Canada. Some were for staff, some for clients and collaborators, and some for the public.

To manage the project, the Survey set up a special office in 1989 reporting to Chief Scientist Robin Riddihough. Survey geologist and senior manager Charles Smith came out of retirement to head up the office. He and assistant Le’Anne Frieday juggled the myriad of details required to pull off the many events and projects.

There were many local events such as the commemorative plaque put up by the Survey in Joggins, Nova Scotia. There were also national projects such as the interactive display Earthly Riddles about the Survey that toured Canada connecting with thousands of people at large public venues. The celebration even went global when geoscientists from around the world gathered in Ottawa for the International Conference of Geological Surveys, held in recognition of the role the Survey plays on the world stage.

Outside groups also commemorated the anniversary – the Royal Canadian Geographical Society mounted an expedition to climb Mount Logan to mark the anniversary, and Petro-Canada ran an advertising campaign commending the Survey’s contribution to Canada’s development.