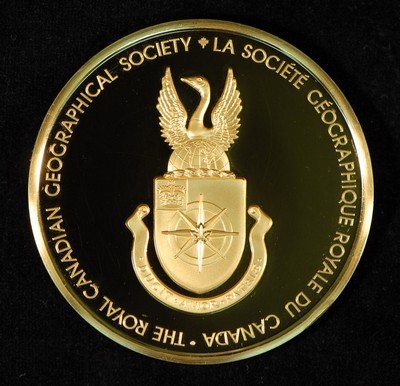 At the 2016 Royal Canadian Geographical Society (RCGS) College of Fellows Annual Dinner, the Society awarded its prestigious Gold Medal to the Geological Survey of Canada. This was in recognition of both the Survey’s outstanding contribution to the development of Canada since 1842 and of its 175th anniversary in 2017.

The Honourable Jim Carr, minister responsible for Natural Resources Canada, accepted the medal on behalf of the Survey. He remarked, “In a department rich with leading-edge research and science, the Geological Survey of Canada still stands out as the crown jewel: our nation’s first scientific agency and one of our oldest government organizations…This Gold Medal is a timely and fitting honour; one that recognizes the Survey’s 175 years of scientific excellence — celebrating its past contributions and anticipating its important work still to come.”

The RCGS also awarded individual Gold Medals to Survey scientists Denis St-Onge, Marc St-Onge, and Paul Hoffman for their distinguished contributions to geology. As well, Survey marine scientist Steve Blasco was the 2016 recipient of the RCGS Massey Medal in honour of his outstanding career achievement in the field of marine geophysics.