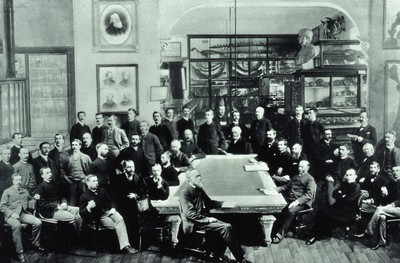 Trained as an artist, Scottish-born William Notman came to Canada in 1856 and set up a photographic studio in Montreal. Commissioned to document the construction of Montreal’s Victoria Bridge in 1858, his pictures so impressed Queen Victoria that she named him “Photographer to the Queen”. He quickly became a huge success and was the photographer of choice for Canadian society. By the 1870s he had a staff of over 50 and 14 branch studios across Canada.

One of his major innovations was composite photography of groups of people, often appearing in outdoor settings. This involved the creation of master drawings, painted backdrops, and individually photographed poses of each person with lighting and shadows. A cut-out of each individual was pasted into a photograph of the backdrop for the master negative.

For his photograph of the Geological Survey of Canada staff in 1888, the backdrop was the museum at 541 Sussex in Ottawa. The Director, Alfred Selwyn, and his staff are seen grouped around a large table. Former staff members, such as William Logan, Elkanah Billings, and Alexander Murray, were included through the device of having their portraits on the walls.