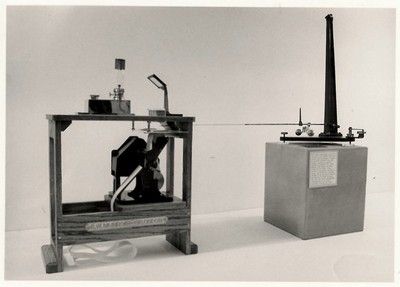 Milne seismographs were the first continuously recording seismographs deployed in Canada. They were first installed in Toronto in 1897, then in Victoria in 1898. John Milne, an English scientist, developed the seismograph in 1893 while working in Japan, and it became the first widely distributed seismograph. By 1910, 52 instruments were operating, and Milne was beginning to map out the locations of the world’s earthquake regions.

The seismograph is a type of pendulum that detects the horizontal motion of seismic waves generated by large earthquakes. This motion is recorded on a strip of photographic paper that moves at a rate of 50 millimeters an hour. The Milne seismograph was good at recording large distant earthquakes, but was not very sensitive to smaller nearby earthquakes.

Milne seismographs were mostly phased out in the 1920s and replaced by more sensitive new instruments. The original Milne seismograph that was installed in Victoria was restored in 1988, and is on display at the Geological Survey of Canada’s office at Sidney, British Columbia, home to the Survey’s seismology group for western Canada.