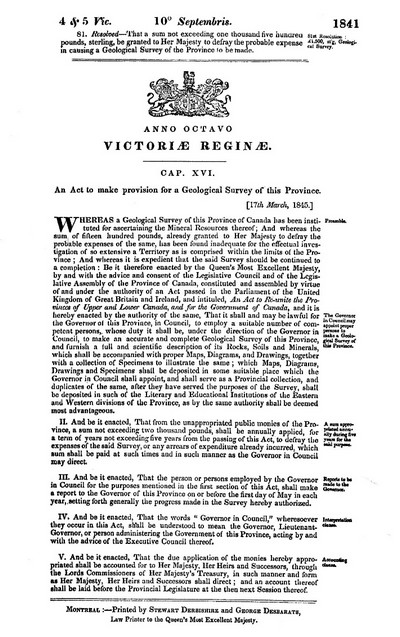 Discussion in the Legislative Assembly of Upper Canada about the need for "a geological survey" began in 1832. Driving this was the realization that the development of an industrial economy in the fledgling nation would depend, in part, on a viable mining industry. More pressing problems, however, kept it off the political agenda.

Finally in 1841, petitions to the newly united parliament of Upper and Lower Canada from the Natural History Society of Montreal and the Literary and Historical Society of Quebec bore fruit, and £1500 pounds were allocated for a geological survey of the Province of Canada. Montreal-born William Logan was hired the following year, and he immediately hired an assistant, the Scottish-born Alexander Murray.

The act, passed in 1845, included instructions to "make an accurate and complete Geological Survey of this Province and furnish a full and scientific description of its Rocks, Soil, and Minerals." It also specified the requirement to collect and display specimens and to produce annual reports in both English and French. On May 12, 1845, a relieved Logan wrote to his friend Henry De la Beche, "I drew it up myself, and no changes were made in it."