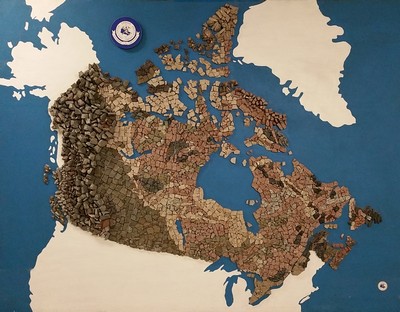 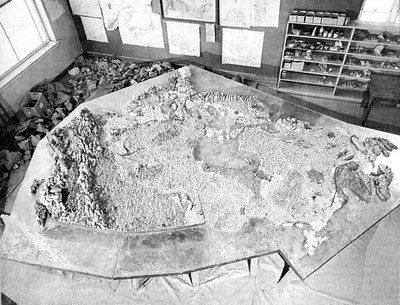 As its contribution to the Canadian Pavilion at Expo 67, the Geological Survey of Canada prepared a unique map of Canada (about 10 metres in width), on which Canada’s major geological formations were represented by their characteristic rocks.

Hal Steacy, Curator of the National Mineral Collection, and Survey paleontologist Don Norris had suggested the idea in 1965, and R. Gauthier and J.M. Larose of the Survey’s Rock and Mineral Sets Preparation Unit carried out the construction. In total, they collected about two tons of the five rock types needed for the map: greenstone, limestone, dolomite, greywacke, and rose granite. This material was used to produce rock chips of various sizes so that the map could also show the changes in physical relief across the country.

The exhibit attracted much attention, with visitors particularly interested in the geology of their home region. In addition to the rock map, the Survey provided 93 large specimens of minerals, rocks, and ores for the Geology Court of the Canadian Pavilion – a continuation of the Survey’s contributions to international expositions stretching back to 1851. The fate of the rock map is unknown.