Synopsis of research conducted under the 2014-2015 Northern Contaminants Program 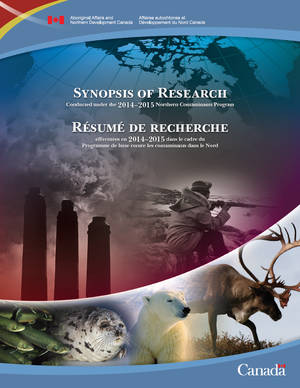 This report provides a summary of the progress to date of research and monitoring studies pertaining to contaminants from long-range sources in northern Canada, and related communications, outreach, capacity-building and policy activities that were conducted in 2014-2015 under the auspices of the Northern Contaminants Program (NCP).

The NCP mandate is to work to reduce and, wherever possible, eliminate contaminants in traditionally harvested foods, while providing information that assists informed decision making by individuals and communities in their food use. The projects reported herein cover the broad range of topics that contribute to understanding and addressing northern contaminants issues, as outlined in the NCP strategic plans (e.g., Blueprints), including dietary contaminant exposure, effects of contaminants on the health of people and ecosystems, contaminant levels and trends in the Arctic environment and wildlife and the influence of climate change, and community-based monitoring and research.

These projects were subject to a comprehensive technical, peer and northern social/cultural review process, involving external peer reviewers, technical review teams, regional contaminants committees and the NCP Management Committee. This review process ensures that each project supports the priorities and objectives of the Northern Contaminants Program, as outlined in the NCP blueprints and the annual call for proposals. All peer reviewers, review teams and regional contaminants committees use evaluation criteria to review and rate proposals. Consultation with northern community authorities and/or Indigenous organizations is required for all projects involving field work in the North and/or analyses of samples, as a condition of approval for funding.

Preliminary results of projects funded in the 2014-2015 year are presented here. Submission of a report for this publication ensures program transparency, allows for timely sharing of results, and is a mandatory deliverable for all recipients of NCP project funding. These reports and any future peer- reviewed publications related to these studies will be available through the NCP Publications Database housed at the Arctic Science and Technology Information System (ASTIS) hosted by the Arctic Institute of North America (AINA) at www.aina.ucalgary.ca/ncp. Other project deliverables include submission of data/ data sets/ metadata to the Polar Data Catalogue at www.polardata.ca.

The Northern Contaminants Program (NCP) engages Northerners and scientists in researching and monitoring of long-range contaminants in the Canadian Arctic, that is, contaminants that are transported to the Arctic through atmospheric and oceanic processes from other parts of the world and which remain in the Arctic environment and build up in the food chain. The data generated by the NCP is used to assess ecosystem and human health, and the findings of these assessments are used to address the safety and security of traditional country foods that are important to the health and traditional lifestyles of Northerners and northern communities. The findings also inform policy, resulting in action to eliminate contaminants from long-range sources.

The NCP contributes scientific data and expertise to contaminants-related international initiatives such as the Arctic Monitoring and Assessment Programme (AMAP), and to international agreements such as the UNEP Minamata Convention on Mercury, the Stockholm Convention on Persistent Organic Pollutants, and two protocols under the United Nation Economic Commission for Europe Convention on Long-range Transboundary Air Pollution, working globally to improve the health of Arctic people and wildlife over the long term.

The management committee is responsible for establishing NCP policy and science priorities and for making final decisions on the allocation of funds. Regional contaminants committees established in Yukon, Northwest Territories, Nunavut, Nunavik and Nunatsiavut support this national committee. Funding for the NCP’s $4.1 million annual budget comes from CIRNAC and Health Canada.

Details about the management structures and review processes used to effectively implement the NCP, and the protocol to be used to publicly disseminate health and harvest information generated by the NCP can be found in the NCP Operational Management Guide (available upon request from the NCP Secretariat).

This report provides a summary of the progress to date of research and activities funded by the Northern Contaminants Program in 2014-2015. It is a compilation of reports submitted by project teams, emphasizing the results of research and related activities that took place during the year.

(from Contaminants in Canada’s North: Summary for Policy Makers)

(adapted from Contaminants in Canada’s North: Summary for Policy Makers)

In terms of Environmental Monitoring and Research, the NCP will

In terms of Human Health Research, Monitoring and Risk Assessment, the NCP will

In terms of Communications and Outreach, the NCP will