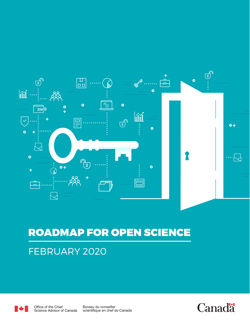 This Roadmap outlines next steps that should be taken to make federal science open to all, while respecting privacy, security, ethical considerations and appropriate intellectual property protection. It has been informed by the work of the Open Science Roadmap Advisory Committee, chaired by Leslie Weir. The Committee worked diligently under tight timelines and delivered unanimous principles that guided my recommendations. The Roadmap was further refined thanks to the thoughtful feedback received from the federal departments, agencies and granting councils.

I look forward to working together and making science accessible to all.

The objective of the Roadmap for Open Science is to provide overarching principles and recommendations to guide Open Science* activities in Canada. The recommendations are intended for science and research funded by federal government departments and agencies.

To make Canadian science* open to all, maximizing benefits for the well-being, health and economy of our country.

Open Science makes scientific information available to all. The benefits include:

Creating Opportunities for Impact: Open Science accelerates the discovery process by allowing others to build on previously validated discoveries and research contributions and to create opportunities for innovation and prosperity.

Leveraging Diversity and Inclusion: Open Science creates opportunities to benefit from the diversity of knowledge systems and perspectives.

Building Synergies with International and Domestic Open Science Movements: Governments around the world are embracing Open Science. Canada has an opportunity to be a part of this movement to shape the global vision of Open Science.

The Roadmap for Open Science was developed in the context of the Directive on Open Government, the Model Policy on Scientific Integrity and the Data Strategy Roadmap for the Federal Public Service. It builds on the Tri-Agency Open Access Policy on Publications and the Statement of Principles on Digital Data Management.

A federal approach to supporting Indigenous data strategies is outlined in the Data Strategy Roadmap for the Federal Public Service, Recommendation 8. For this reason, Indigenous knowledge and rights to self-determination are not explicitly covered in this roadmap and its recommendations.


This recommendation sets the tone for the document and for the recommendations that follow. Given the complexities associated with adopting an Open Science approach, implementation should take a phased approach.

This recommendation aims to engage federal researchers and scientists in identifying challenges and concerns, as well as benefits and tools that would enable employee participation in Open Science activities. Feedback received should inform the Open Science action plans (Recommendation 3). This recommendation is consistent with the Model Policy on Scientific Integrity section 7.7, Role of employees in science advice and evidence-informed decision-making, in particular clauses 7.7.1 – 7.7.3.

Federal departments and agencies should collaborate on central approaches to common elements of their plans to achieve this recommendation, particularly, in terms of IT solutions, guiding principles with regards to official languages, web- accessibility and timelines. The Chief Science Advisor will facilitate, as necessary.

This recommendation aims to achieve Open Access by default without an embargo period. It applies to new science articles published in academic scholarly journals as of January 2022, as well as new federal science publications released as of January 2023. This recommendation also applies to new science articles and publications that were contracted by a federal government department or agency and published as of January 2023. For legacy publications, a responsive action plan should be developed to share publications requested with time-bound commitment for delivery. When a research project and resulting publication have received support from multiple funders, the federal government should uphold the most open of the Open Access policies.

This recommendation is consistent with the Model Policy on Scientific Integrity, section 6.3, In the absence of clear and compelling reasons for limiting disclosure, ensure that research and scientific information produced by a department or agency is made available to the public in a timely manner and in keeping with the Government of Canada’s Directive on Open Government.

The federal science community should use a common approach to achieving this recommendation. It may explore the opportunity to develop shared tools and infrastructure to meet this target. The Chief Science Advisor will facilitate, as necessary.

This recommendation aims to ensure that the scientific information that is open is also “Findable, Accessible, Interoperable and Reusable” (or “FAIR”) in order to maximize the benefit. It is aligned with the Data Strategy Roadmap for the Federal Public Service.

The federal science community should use a common approach to achieve this recommendation. This should be co-led by the Treasury Board Secretariat (Chief Information Officer) and the Office of Chief Science Advisor.

This recommendation aims to provide a whole-of-government approach to identifying what scientific research outputs should be kept private or confidential.

This recommendation articulates a governance structure that would oversee the design and implementation of Open Science Action Plans. Through establishing a governance structure, it aims to ensure harmonized implementation of the Open Science Action Plans. The terms of reference and relationship structure with departments and agencies should be developed by June 2020.

This recommendation articulates the need for a coherent Open Science strategy for Canadian science more broadly, while respecting privacy, security, ethical considerations and appropriate intellectual property protection. A consultation with the extramural scientific community and relevant partners should guide this strategy.

This recommendation highlights the dynamic and evolving nature of Open Science. As digital technology and Open Science practices evolve over time, the Roadmap will also evolve. The list of principles is not exhaustive and will continue to develop over time. Further considerations might also emerge in conversations with scientists, researchers and open science users.

Open Science: The practice of making scientific inputs, outputs and processes freely available to all with minimal restrictions. Scientific research outputs include (i) peer- reviewed science articles and publications, (ii) scientific and research data and (iii) public contribution to and dialogue about science. Open Science is enabled by people, technology and infrastructure. It is practiced in full respect of privacy, security, ethical considerations and appropriate intellectual property protection.

Science: The pursuit and application of knowledge and understanding of the natural world through application of one or more elements of the scientific method. In the context of this roadmap, it is understood to include both fundamental and applied natural, physical, biomedical and social science, as well as engineering and mathematics.

Scientific and research data: Data that include, but are not limited to, observational, monitoring, operational, modelling and simulation, risk-assessment, survey and surveillance, research and development and technology innovation data.