Scientists at the Public Health Agency of Canada’s National Microbiology Laboratory (NML) are working to understand the extent of antimicrobial resistance (AMR) in Canada. AMR surveillance is essential to identify new threats and properly assess the potential burden of AMR globally.

Recognizing the need for a network that would capture data from across the country, the NML developed a lab-based surveillance system called the Antimicrobial Resistance Network or AMRNet. This surveillance system is gathering data from bacterial and fungal samples tested for AMR in clinical (human) and veterinary laboratories, organizing it into a standardized format and making it available to the public health and scientific community. These data are then used to inform interventions that can prevent illness and reduce the spread of AMR. The project is a collaboration between PHAC, provincial and territorial public health organizations and laboratories.

What is antimicrobial resistance?

Antimicrobial resistance happens when bacteria that cause illness become resistant to the antimicrobial drugs used to treat them. The leading causes of increased AMR are the overuse or inappropriate use of antimicrobial drugs, such as antibiotics, in preventing or treating infections in people and animals. The threat of AMR is that infections (such as pneumoniaor infections associated with minor injuries) could become untreatable if we don’t have effective antimicrobial medicines. The World Health Organization (WHO) declared AMR as one of their top ten global public health threats in 2019.

The NML started routine surveillance through AMRNet in select provinces this year, with plans to expand across the country in the coming years. AMRNet will also contribute to WHO’s Global Antimicrobial Resistance and Use Surveillance System (GLASS). 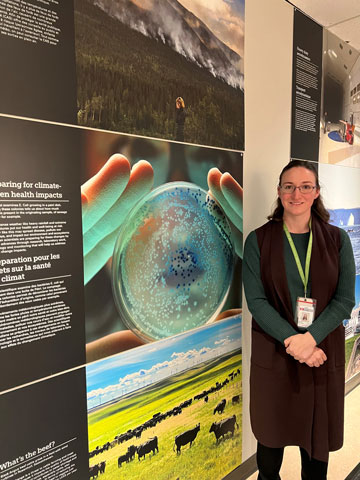 Dr. Wallis Rudnick standing in front of a scientific poster

Dr. Wallis Rudnick, the head of the AMRNet program at the NML, says AMRNet will allow them to address gaps in Canadian AMR surveillance. Scientists know gaps exist in surveillance in community settings, smaller hospitals and long-term care facilities.

“Developing new and innovative tools like this platform helps everyone to have a better understanding of the trends and identify emerging issues faster, leading to further investigations and responses,” says Dr. Rudnick.

For example, if they see in the data that there are increases in resistance to a certain antimicrobial, they can determine whether it’s happening across the country or in a smaller region, then flag it to the appropriate authorities. Understanding local patterns of AMR helps doctors, pharmacists and other public health professionals make decisions about what antimicrobials to prescribe, how best to prevent the illness and also prevent the spread of AMR.

Additionally, the integration of human and animal data in AMRNet will help inform the NML’s One Health response to AMR issues. “One Health” refers to the practice of bringing together experts from human, animal and environmental health to support evidence-based public health actions, since these areas are all interconnected. In this case, scientists collect data on animals because the same types of antimicrobials are often used in animals as in humans, so an emergence in AMR on the animal side can also show up in humans, and the other way around.

AMRNet, with a focus on patient settings, is building on the work of the Canadian Integrated Program for Antimicrobial Resistance Surveillance (CIPARS). CIPARS collects, analyses and communicates trends in antimicrobial use and antimicrobial resistance for select bacteria from humans, animals and retail meat. This year marks the program’s 20th anniversary.

AMR research at the NML

Dr. Rudnick says AMRNet is a long-term project and vision by many scientists at the NML, spearheaded by Dr. Mike Mulvey, Chief of AMR and Nosocomial Infections and Dr. Shamir Mukhi, Director of the Canadian Network for Public Health Intelligence, who both reside at the NML. 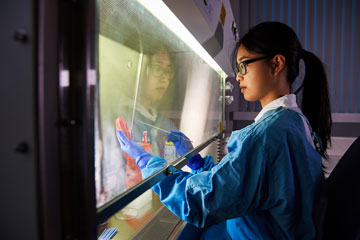 Scientist doing research on antimicrobial resistance at the NML

“Programs like AMRNet are the reasons why people choose to work in public health,” says Dr. Rudnick. “It is really meaningful to develop this network on a national level. This program will increase the amount of information we have on AMR and give us a more in-depth picture of what’s happening on the ground across the country.”

The NML also contributes to AMR research and surveillance by providing services to provincial public health and hospital laboratories that help confirm AMR in bacteria, supporting outbreak investigations, and conducting research to identify new technologies and methodologies that could influence both antimicrobial use and the identification of resistant bacteria.

How to prevent AMR

If you get sick and you think you might need antimicrobials, speak with your healthcare professional about the right treatment, and how to use antimicrobials responsibly. Take steps to learn how you can prevent antimicrobial resistance for yourself and your family.