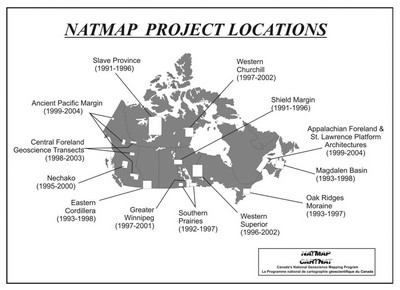 The National Geoscience Mapping Program (NATMAP) was launched in 1991 to address growing gaps in systematic geological map coverage in Canada. This deficiency, in what many regarded as the fundamental role of a national geological survey, had resulted from declining budgets and increasing demands for specialized geoscience. At the same time, the capacity of provincial and territorial geological surveys had increased, raising concerns about overlap and duplication.

NATMAP was a new way of doing business. It involved little new funding, relying instead on collaboration among federal, provincial and territorial surveys, academia, and industry. Projects were proposal-driven, peer-reviewed, and jointly funded, managed, and delivered by at least two jurisdictions.

NATMAP Projects ranged from the surficial geology of the Oak Ridges Moraine - crucial to understanding groundwater supplies in the Greater Toronto area, to the geological framework of the mineral-rich Slave Province in the Northwest Territories, to the evolution of oil and gas in the Magdalen Basin in Atlantic Canada. 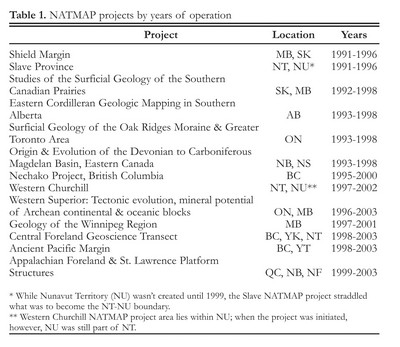 NATMAP came to a successful conclusion in 2003, its 13 projects having produced an estimated 750 new geological maps and 2250 reports.