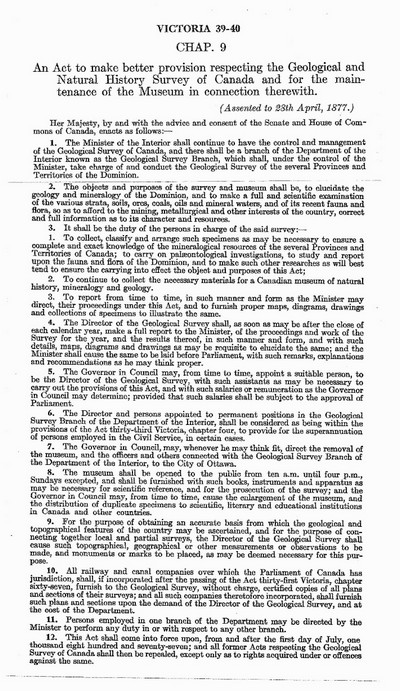 For its first 35 years, the Geological Survey of Canada reported to the Governor in Council and was financed through individual acts passed by Parliament about every five years. In 1877 that all changed when an act was passed "to make a better provision respecting the Geological and Natural History Survey of Canada and for the maintenance of the Museum in connection therewith."

As a result, the Survey became part of the Department of the Interior and its long-term funding was stabilized. Its mission remained as before, with some key additions. The Survey was now officially charged with gathering specimens of all aspects of Canada's natural history, something its geologists had been unofficially doing since 1842.

The act also strengthened the Survey's museum responsibilities. It specified that the materials were to be collected for a "Canadian museum of natural history, mineralogy and geology" and that it "shall be open to the public every day except Sunday from 10 am to 4 pm." It also indicated that a move of the Survey from Montreal to Ottawa was to be expected. The Survey's name change to include natural history remained in effect until 1890.