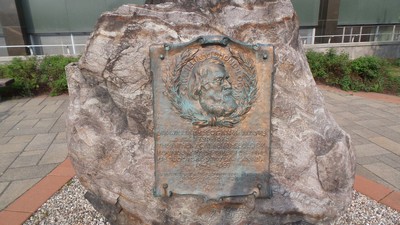 The International Geological Congress is a major event for the geoscience community. The first Congress was held in Paris in 1878, and every three to five years after that. Canada was instrumental in its establishment, with two notable Canadian geologists on its 11-person founding committee: T. Sterry Hunt of the Geological Survey of Canada and William Dawson, McGill University.

The first Congress to be held in Canada took place in Toronto in 1913, with Survey Director Reginald Brock (1907-1914) as Secretary-Treasurer of the planning committee. A legacy of the Congress was a tribute to Sir William Logan in the form of a memorial boulder. The bronze plaque has his image and the words: “Sir William E. Logan, Kt., LLD, FRS, 1798-1875, The Father of Canadian Geology, Founder and First Director of the Geological Survey of Canada, 1842-1869.”

Prime Minister Robert Borden unveiled the memorial outside the Survey’s headquarters, the Victoria Memorial Museum Building, with more than 200 Congress delegates in attendance. An identical plaque was also installed at Percé in the Gaspé in honour of Logan’s fieldwork there. The Logan boulder now stands outside 601 Booth Street, the Survey’s current headquarters.