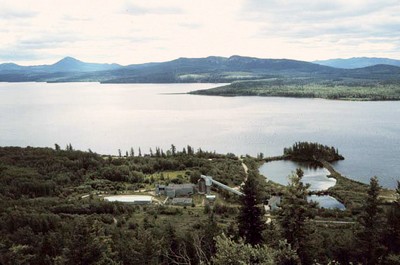 The outbreak of the Second World War gave the Geological Survey of Canada an urgent new priority. Huge quantities of metals and minerals were needed to build tanks, ships, aircraft, and weapons, and Canadian mines were working around the clock to meet the demand. The war also disrupted Canada’s supplies of strategic minerals for domestic use that traditionally had been imported from abroad. As a result, the identification of new resources of oil, gas, and strategic minerals (such as chromite, antimony, tin, tungsten, and mercury) became the Geological Survey of Canada’s principal mission. In fact, by 1943, all Survey work was focussed on projects linked to the war effort.

One noteworthy example was the discovery of mercury at Pinchi Lake near Fort St. James, British Columbia, by Survey geologist J.G. Gray. The original discovery was made in 1938, but under its new marching orders, the Survey carried out further exploration in the area that outlined an important 65 kilometre mineralized fault zone. By 1944, Pinchi Lake was the largest source of mercury in the British Commonwealth.