The open science dialogues: Summary of stakeholders round tables 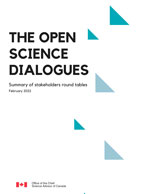 A key mission of academic research is to generate new knowledge and disseminate it. Since their establishment following the printing revolution, scientific journals have become the primary vehicle for knowledge dissemination. Additionally, in some fields scholars share the results of their work in books and monographs. Recruitment and promotion as well as granting and award committees rely heavily on the publication track record in their deliberations. They look at the number of publications, the prestige of the journal or publisher and the impact of the work as evidenced by how often it is cited or used by others. Research data that is not part of such publications has not been historically broadly shared, though there are shifts in some disciplines enabled by digital transformation, supporting infrastructure and disciplinary culture.

Scientific publishing has been done historically through subscription journals making research output accessible only to subscribers. The widespread use of Internet has enabled a new model of publishing: Open Access journals. The content of an Open Access journal is freely available online at the time of the publication and journal expenses are paid by the authors via Article Processing Charges (or APCs) instead of subscribers. Some Open Access journals have become leading journals in their disciplines. Many prestigious journals remain subscription-based today although they increasingly offer authors the option to pay APC to make the article freely accessible. As subscription journals moved to an online format, content became freely available only after an embargo period, which can vary between one to three years. Authors have the option to make a preprint or publication openly accessible by depositing a copy into an open repository.

Open ScienceFootnote 1 (also known as open scholarship) is the practice of making scientific inputs, outputs and processes freely available to all with minimal restrictions. The benefits of Open Science include increasing access to knowledge, improving reproducibility, reducing duplication, creating opportunities for impact, and accelerating knowledge transfer. Open Science was recognized as a commitment in Canada’s Action Plan on Open Government in 2016. The following year, the position of the Chief Science Advisor of Canada was created with the mandate to “provide advice on the development and implementation of guidelines to ensure that government science is fully available to the public.” As part of the 2018-2020 Action Plan on Open Government, Canada has committed to creating a Roadmap for Open Science. The Roadmap was released in February 2020 by the Chief Science Advisor of Canada and the Honourable Navdeep Bains, former Minister of Innovation, Science and Economic Development. It articulates a vision, principles and recommendations to make government science fully available to the public. The Office of the Chief Science Advisor (OCSA) has advanced the file across government agencies and science-based departments who have since developed Open Science Action Plans. Among other recommendations, the Roadmap articulates the need for a cohesive Open Science approach for federally-funded Canadian science and suggested consultations with university researchers to be the first step in this process (Recommendation 9). Such consultation was conducted in November 2021 and is the main focus of this document.

Given the complementarity between Open Science and research security, Dr Nipun Vats, Assistant Deputy Minister at Innovation, Science and Economic Development Canada, provided short remarks on research security as part of the discussion on open data during the roundtables with researchers.

The COVID-19 pandemic has demonstrated the vital importance of Open Science with the rapid development of diagnostics and vaccines having been enabled by immediate and open access to research data and scientific publications. This was the result of the research community, research funders and publishers agreeing on openly sharing all COVID-19 research data and findings without delay. The chief science advisors and equivalents from 16 countries including Canada had released a Call for Open Access to COVID-19 Publications asking the publishing industry to make COVID-19 publications openly available in both human-and machine-readable formats.

Five Open Science Dialogues were organized by the OCSA in November 2021 with the objective to solicit practical approaches and suggestions on how to achieve open and secure science in Canada. Over eighty participants took part in the dialogues, including leading Canadian researchers from diverse groups, disciplines, geographies and career stages, as well as representatives from key national and international research funders (Appendix A). Researchers were selected based on their prominence in their respective fields and not their prior Open Science achievements or advocacy. This summary of stakeholder roundtables aims to capture the opinions expressed but might not represent the view of all participants.

Since the release of the Roadmap for Open Science, the international Open Science landscape has continued to evolve. A major milestone was the unanimous adoption of the UNESCO Recommendation on Open Science by the 193 Member States in November 2021. Also in 2021, France released its Second Plan for Open Science that provides a coherent and funded plan to enable publicly-funded research (publications, data, source code and algorithms) to become open. The UK’s national research and innovation funder, UKRI, updated its Open Access policy which includes funding to support open access research articles, as well as open access negotiations. In Germany, Projekt DEAL, a consortium of universities and research libraries, negotiated directly with the publishers and achieved big transformative agreementsFootnote 2 in 2020. Other countries (e.g. Netherlands, Norway, Switzerland) and research institutions (e.g. the University of California system) have also negotiated transformative agreements.

International trends in Open Access publishing include posting preprints in open repositories, requiring immediate (i.e. no embargos) access in Open Access or transformative journals, providing financial support for publications and negotiating with the publishers to lower the cost. Other key trends include using an equity lens when designing Open Science policies, rethinking research evaluation and focusing on enabling open data and open software. Given that the publishing industry is expanding its scope to the entire research lifecycle, many peer nations are developing open data and open software policies and enabling infrastructures to ensure that data stays in the public domain.

In Canada, research charities along with provincial and federal funders have diverse sets of Open Science policies (and some have none). In 2021, the Quebec government’s major research funding agency, le Fonds de Recherche du Québec, joined cOAlition SFootnote 3 in a commitment to the implementation of immediate Open Access to scientific publications by March 2023. The Tri-Agency Open Access Policy on Publications (2015) applies to publications arising from agency-supported research and requires them to be freely accessible within 12 months of publication (via journal and/or online repository). There is no dedicated Tri-Agency fund to support costs associated with OA publishing, but the agencies consider these costs to be eligible grant expenses. Social Sciences and Humanities Research Council (SSHRC) directly funds Canadian social sciences and humanities Open Access journals through the Aid to Scholarly Journals program. In instances of non-compliance, the agencies may take enforcement steps/exercise recourse in accordance with the Tri-Agency Framework: Responsible Conduct of Research.

Participants in the Open Science Dialogue embraced the notion of Open Science but raised significant practical and logistical challenges towards achieving it. They also proposed solutions, particularly in the area of Open Access to publications. Researchers reiterated their support for the Roadmap for Open Science and for a cohesive approach to making publicly-funded research in Canada openly accessible. The rationale for domestic and international harmonization was emphasized since many projects benefit from multiple domestic and international funding and collaborations.

The importance of research security was acknowledged by participants who would benefit from better institutional support to safeguard their research data. Data management and stewardship as well as the other elements of Open Science - data and tools - require attention and further consultation and support.

There is an agreement that national leadership is needed, and the research community has encouraged the Chief Science Advisor to continue exploring ways to facilitate and enable the adoption of Open Science. Making Canadian research openly accessible will enhance its visibility and competitiveness on the international scene, which in turn would attract talent and research investments to the country. It will also help early career researchers and those in small institutions who have less support for knowledge disseminating. Importantly, enabling Open Science will make federally funded research open to the public including to innovators and policymakers in a timely manner, thus maximizing return on investments as exemplified during the COVID-19 pandemic.

David Castle, Researcher in Residence, Office of the Chief Science Advisor of Canada

Cecilia Benoit, Canadian Institute for Substance Use Research and Department of Sociology, University of Victoria

Taylor Morisseau, Department of Pharmacology and Therapeutics, University of Manitoba

Alexandre Bourque-Viens, Office of the Chief Science Advisor of Canada

Masha Cemma, Office of the Chief Science Advisor of Canada

Open Science is defined as “the practice of making scientific inputs, outputs and processes freely available to all with minimal restrictions. Scientific research outputs include (i) peer- reviewed science articles and publications, (ii) scientific and research data and (iii) public contribution to and dialogue about science. Open Science is enabled by people, technology and infrastructure. It is practiced in full respect of privacy, security, ethical considerations and appropriate intellectual property protection.” (Roadmap for Open Science, Feb 2020)

Transformative agreement is an umbrella term describing those agreements negotiated between institutions and publishers in which former subscription expenditures are repurposed to support open access publishing of the negotiating institutions’ authors, thus transforming the business model underlying scholarly journal publishing, gradually and definitively shifting from one based on toll access (subscription) to one in which publishers are remunerated a fair price for their open access publishing services. (ESAC).

cOAlition S is a group of research funding organizations that support Plan S, an initiative to make full and immediate Open Access to research publications a reality.