When we think of our public library, we think of rows and rows of books. However, libraries are much more; they are a central point of information sharing, a hub of knowledge and a pillar of support in communities. Sharing knowledge and responding to local need is how libraries across Canada got involved in the Radon Monitor Library Lending Program.

Radon is a radioactive gas produced by the breakdown of uranium in the ground. It enters your home undetected through cracks and gaps in floors, walls, windows and doors. All homes naturally have some level of radon gas. Long-term exposure to a high level of radon is the number one cause of lung cancer for non-smokers. You cannot see, smell or taste radon; the only way to know how much radon is in your home is to test.

Testing for radon is simple and can save lives. Homeowners can hire a radon measurement professional, or purchase a DIY test kit online. The radon level needs to be measured for 3-months and the test should be done during the fall/winter. If a high radon level is found, it can be fixed! 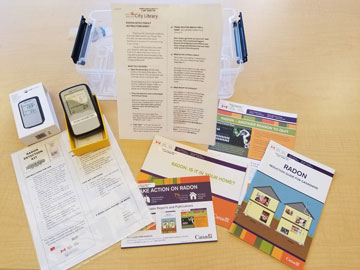 Getting the message out

Raising awareness about any long-term health risk can be challenging, and radon is no exception. That’s why a number of libraries across Canada took it upon themselves to raise awareness about this serious health risk, and launched the radon library lending program. Through these programs, libraries are now lending radon testing kits to patrons, which include a radon digital monitor and information materials.

The test kits are a simple screening tool to raise awareness and encourage action. According to Kelley Bush, Manager of Radon Outreach and Engagement for Health Canada, “the digital monitors only provide a snap shot of the radon level in a home. To find out if you have dangerous levels, home owners need to complete a long-term test for at least 3 months”.

The City of Halifax, in collaboration with the Lung Association and the province of Nova Scotia, started the first radon library lending program in 2018. Not long after, Simon Fraser University (SFU) in British Columbia launched a study to find out if people would be interested in learning about radon and borrowing a radon test kit from their public library. The North Vancouver City Library offered their locations for SFU to set up a kiosk to distribute test kits and collect data for their study.

The public response was overwhelming, “It had a huge uptake, there was a lineup out the door,” said Walter Zicha, Head of Acquisitions and Collection Management for North Vancouver City Libraries. “We had heard of libraries out in Nova Scotia lending digital radon monitors and realized there was a demand for it here as well. We were excited to make them available to our patrons.” He quickly set up a radon library lending program at his library.

Since then, many more libraries, in more than five provinces across Canada, have launched radon monitor lending programs. All of these programs have had overwhelming interest and appreciation from their patrons. 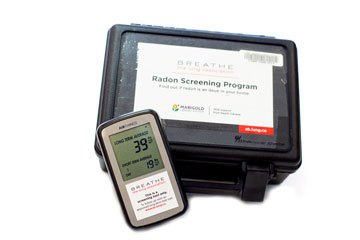 We’re all in this together

Health Canada, who supported several of the initial library programs, saw the popularity and impact of the programs and recognized the need for guidance.

“As more and more libraries were setting up radon lending programs, we saw an opportunity to provide guidance and support to make them more comprehensive and consistent,” says Katelyn Penstone, Policy Analyst at Health Canada.

Kelley Bush adds: “Librarians didn’t always have the information they needed to educate patrons and set up the lending programs, and they were spending time and money on resources that Health Canada already had. We decided to create a turnkey resource that libraries could use to easily set up and maintain their programs.”

“We knew we couldn’t develop the guidance document on our own, so we got all the key players involved,” says Katelyn. These partners included Take Action on Radon, Canadian Association of Radon Scientists and Technologists, provinces and territories, and participating libraries.

The group worked together for months to develop a comprehensive guidance document that includes everything libraries need to know and can use to develop and maintain a successful radon monitor lending program.

There are now 388 library branches across the country that loan radon testing kits—and that number is growing every year.

November is Radon Action Month. If you haven’t already, test for radon in your home and take action to reduce it if it is high. Visit Canada.ca/radon for more information.