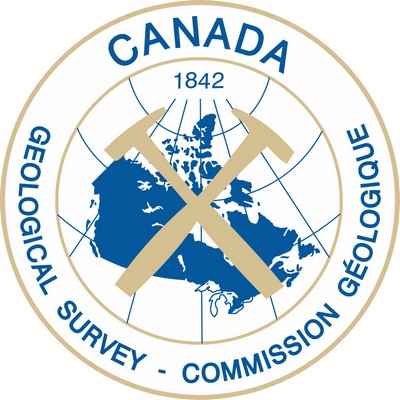 The Geological Survey of Canada is Canada’s oldest government scientific organization and it has a long tradition of excellence. Its logo is the official seal of quality that identifies its research products. It has evolved over time, but the existing logo was registered under Crown Copyright in 1956, with a bilingual version dating from the 1970s. A modified version was developed to mark the Survey’s 150th anniversary and was used throughout 1992. In 1999, the logo underwent a redesign to better define the Arctic islands and the Great Lakes, and to add four of Canada’s major lakes (Winnipeg, Athabasca, Great Slave, and Great Bear).

The Survey’s logo is widely recognized by clients and stakeholders, both nationally and internationally. It is also a source of pride among employees. The crossed geological hammers on the map of Canada underscore the important role of geologists in not only making scientific studies of the geological structure and mineral deposits of Canada, but also in being some of the earliest explorers and mappers of our country.

The Survey’s work, since its founding in 1842, has provided Canadians with a comprehensive geoscience knowledge base and contributed to economic development, public safety, environmental protection, and national sovereignty.